Nope, not cotton candy. It's so much better than that. It's homemade marshmallows: 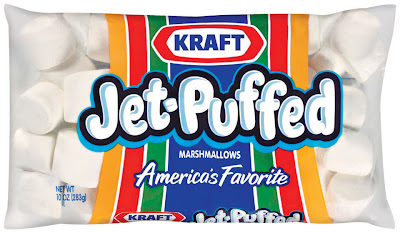 Haha ohhh man... But no, seriously this time: 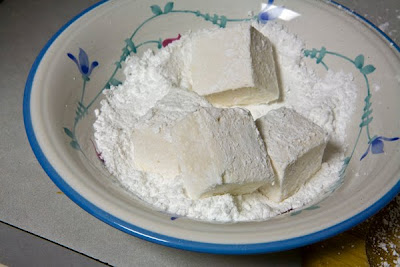 I'd been wanting to try homemade marshmallows for a long time, but when candy thermometers and gelatin are involved in my kitchen endeavors... well that changes things. After conquering yeast while making bageldogs, however, I had some faith in myself and decided to give these marshmallows from Ezra Pound Cake a try. And, in case you were wondering, it's true what they say: homemade marshmallows are way better than the store-bought variety.

For the first time I figured I'd stick to the basic vanilla flavor, but if I make these again I'm definitely breaking out the Bailey's. Or the Kahlua... 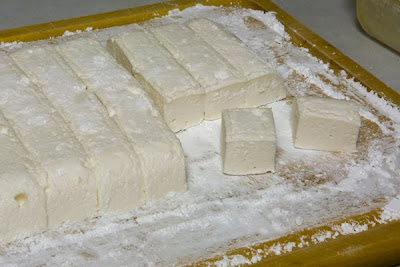 
1. Grease a 13 by 9 inch baking pan with oil or nonstick spray, and dust it thoroughly with powdered sugar.

2. Pour the cold water into a large bowl and sprinkle the gelatin on top. Set it aside to soften.

3. Set a large saucepan on the stove with a candy thermometer clipped to the side. Add the granulated sugar, corn syrup, hot water and salt, and cook the mixture over medium-low heat, stirring with a wooden spoon, until the sugar is dissolved.

4. Turn up the heat to medium, and bring the mixture to a boil (without stirring it!) until your candy thermometer reads 240°F. This takes a few minutes, so don't get distracted and forget about it like I almost did (twice).

6. Using an electric mixer, beat the mixture on high speed until it’s bright white, thick and nearly tripled in volume.

7. In a separate bowl with clean beaters, beat your egg whites until they just hold stiff peaks.

8. Add the egg whites and vanilla (or whatever flavoring) to the sugar mixture, and beat until everything is just combined.

10. Pop the pan into the refrigerator, and let the mixture chill until it’s firm. This will take at least 3 hours, but you can leave it in the fridge for up to 24.

11. When your marshmallow is ready, run a knife around the edges of the pan to loosen. Turn the pan upside-down on a large cutting board, and starting at one corner, use your fingers to loosen the marshmallow from the pan so that it falls onto the board.

12. Using a knife or scraper, cut the marshmallow into 1-inch cubes by pressing down rather than sawing back and forth.

13. Sift some more powdered sugar into a bowl and add marshmallows in batches, tossing them to evenly coat in sugar. 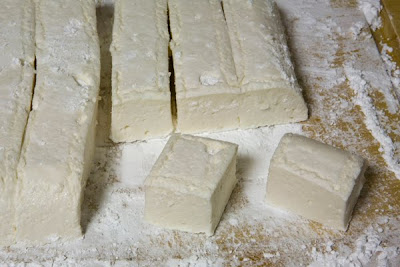 This makes a lot of marshmallows but fear not! they probably won't last very long. You can keep them in an air tight container at room temperature for about a week, or just eat them all immediately and suffer the consequences of sugar-overload before the sugar coma kicks in.
Posted by Julia at 1:12 PM

Julia
Austin, TX
I'm a full time student at UT, working on an english major/business minor with future plans to weasel my way into the pastry field and someday own a bakery of my own.